…
For a better experience please change your browser to CHROME, FIREFOX, OPERA or Internet Explorer.

A hunting knife is a key part of your kit. Here’s how to choose one.

Once, when I was 13, I had been ferreting and needed to hock a couple of rabbit carcasses in order to hang them on my bicycle handlebars. I was finding the job a bit tricky because my cheap little penknife had never been sharpened. Suddenly, something snapped. I noticed a surfeit of blood. It was my own. My finger was slit to the bone. I suppose this supports the old saying about knives: it’s the blunt ones that cut you. If my knife had been properly maintained, I wouldn’t have had to force it and it wouldn’t have folded and caught my finger. In any case, it would have been safer if it had a locking mechanism.

Interestingly, recent knife legislation dictates that you cannot carry a locking knife in a public place without a lawful reason. I suppose you could say that this is a case of knife law colliding with knife lore. Despite my early attempt at DIY surgery, I generally prefer folding knives. I don’t like carrying a knife in a sheath on my belt, preferring to carry a folder in my pocket or backpack. I have a slightly irrational concern that a knife worn on a belt might fall out if I have to crawl or push through cover.

Hunting knife users tend to fall into one of two factions: those who appreciate the aesthetic qualities of a hand-built knife, and the utilitarians, who want a knife that works, without the poetry — not to mention the cost. I like to count myself in the latter camp. Somehow, I can manage to gralloch a deer without the benefit of mammoth ivory or Damascus steel. And yet… I have a guilty secret. For special occasions, I have a slim, elegant and rather understated little knife that bears a magical name on its blade: Alan Wood. I bought it from the man in person, many years ago. You won’t find a fancy website for Alan but, among those who know, he is regarded as one the finest knifemakers in the world.

There is a whole world of custom knifemaking in the UK, with a roll call of names that are revered within their field: Emberleaf, Stuart Mitchell, Guy Stainthorp… Their handcrafted creations are regarded by aficionados as the knife equivalent of the likes of Purdey, Holland and Rigby. There are also specialist factory knives. 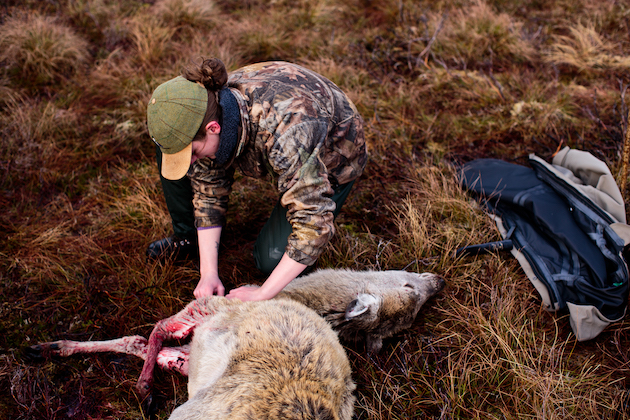 Gralloching should be done immediately with a hunting knife

Mike Robinson, the chef and deer manager, has worked with a manufacturer to produce a knife that meets the very specific needs of deerstalkers. I cannot think of anybody better qualified to design such an implement. The Swedes produce some of the very best knife steel. My own everyday deer knife is a locking folder called the Swede 10 made by EKA, based in the ancestral steelmaking town of Eskilstuna. I have also heard good things about EKA’s swingblade model, which has a cult following. And very affordable knives from another Swedish maker, Mora, have been favoured by stalkers for years.

The Americans also make good factory knives, with notable firms including Buck, with its iconic 110 Folding Hunter, and Gerber, with its famous Gator series. Then there is the German firm of Böker, which produces some fine hunting blades. Come to think of it, I feel I really do need yet another knife…

You can find out more about which cookies we are using or switch them off in settings.

This website uses cookies so that we can provide you with the best user experience possible. Cookie information is stored in your browser and performs functions such as recognising you when you return to our website and helping our team to understand which sections of the website you find most interesting and useful.

Strictly Necessary Cookie should be enabled at all times so that we can save your preferences for cookie settings.

If you disable this cookie, we will not be able to save your preferences. This means that every time you visit this website you will need to enable or disable cookies again.