…
For a better experience please change your browser to CHROME, FIREFOX, OPERA or Internet Explorer.

Terrier breeds: are they born anarchists?

Terriers may view us as the fun police, but if we make the effort to get them on message their work ethic is second to none, says Jackie Drakeford

Most, if not all of the terrier breeds bring a smile to our faces, whether the smug condescension of the handler of well-trained gundogs or the rictus of embarrassment that comes from having thought your dog’s behaviour could not get any worse before you discover that it just has.

Quite a few owners of well-trained gun dogs have one of the terrier breeds tucked away somewhere, usually dismissed laughingly as the other half’s pet, sometimes coming out in the beating line to demonstrate various arcane skills or generally lightening the mood of the day by displaying regrettable behaviour. 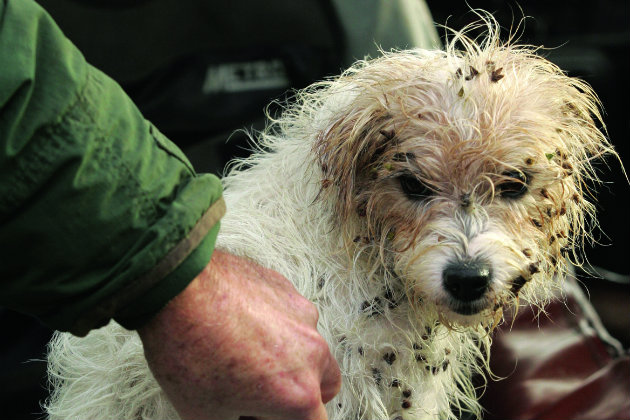 Terriers give a new perspective to gun ownership

Terriers give a whole new perspective to dog ownership. But terrier breeds are eminently trainable, as long as the human side of the arrangement can be flexible in attitude, for the desire for collaboration that we get in such breeds as gundogs and herders is totally absent in terriers unless we make doing what we want worth their while. They drive a hard bargain.

Dog types can be roughly divided into task-oriented: “What are we going to do together?” — where the task itself is the reward — and results-oriented, where the dog works towards a specific end by any available means: “What’s in it for me?”

So in order to get the co-operation of a terrier, it needs to see us not as the fun police but as a comrade-in-arms. Terriers are born anarchists, so comradeship does not come naturally and has to be earned. Though they are hardwired to do their work — and we have ours cut out to see that they don’t start before they have exchanged their milk teeth for the awesome weaponry of the adult terrier — we handlers have to install sufficient brakes so that we can be there when anything happens, rather than trailing feebly in the wake of accelerating yaps. Or worse, that deafening silence.

Before terriers ever taste the joys of pursuit and (it has to be said) combat, our task is to teach a sound recall, one of the most difficult things to teach any “results” dog, and to reduce the preferred working distance from coast to coast via everywhere to 50 yards or so from us. Every dog has a distance at which control weakens, and it is sooner rather than later with terriers, though the caveat is not to be on their case too strictly because then they will create distance before they start to work. 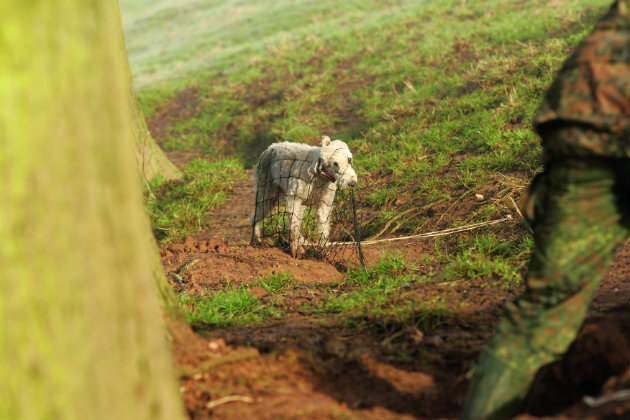 Things didn’t quite go to plan for this Bedlington terrier

Those little stumpy legs can still take them farther much faster than a person can run, so the plan is to let the terrier do the running, but check in with us from time to time. To do this we use reward-based training, and don’t expect the terrier to find praise rewarding because it cares not a jot about pleasing you. It takes a great deal less effort to please itself, so we have to use cunning and forward planning to convince the terrier that it has more fun sticking with us than running off. In this we will only ever be partially successful, so we need to anticipate and deflect, being proactive rather than reactive, an attitude that can come very hard to those whose experience is of more co-operative breeds.

Training has a degree of potential for failure in any breed, but management always works. We need to be several steps ahead of terriers, and when they do oblige, the wise handler rewards appropriately. This does not mean a piece of kibble. If we want £100 behaviour, we won’t get anywhere by offering a 50p reward. 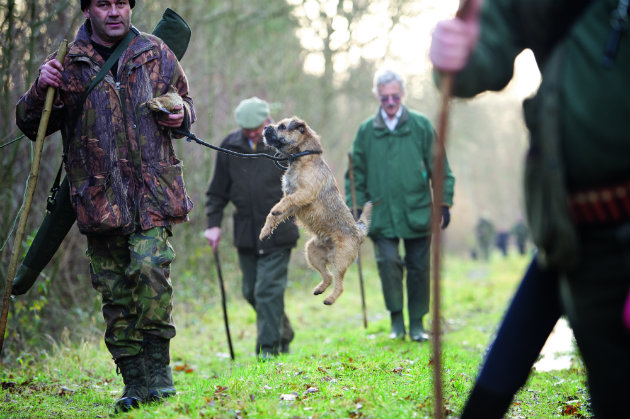 We must vary our rewards too, because terrier breeds have an extraordinarily low boredom threshold. The element of surprise keeps them interested. From time to time the reward should be withheld, because gambling is as addictive to dogs as it can be to people, whereas nobody ever became addicted to a vending machine. All terriers become excited very quickly and we need to keep their home life calm so that going out and working with us is their main source of delight. Otherwise why would they co-operate for something they can easily enjoy at any time? Squeaky toys should silenced by piercing the squeaker with a skewer, barring a single exception that comes out on walks and training sessions only. It is never given to the terrier, but is a squeak that lives in your pocket. Providing it is not over-used it can be invaluable when coupled with a well-timed reward. If you think you don’t have the timing, don’t use the toy. Biting down on squeaky toys also encourages hard mouth, and given that all but a very few terriers need no encouragement whatever in this direction, if you want your terrier as a beating or roughshooting companion, it is better to eschew them completely. 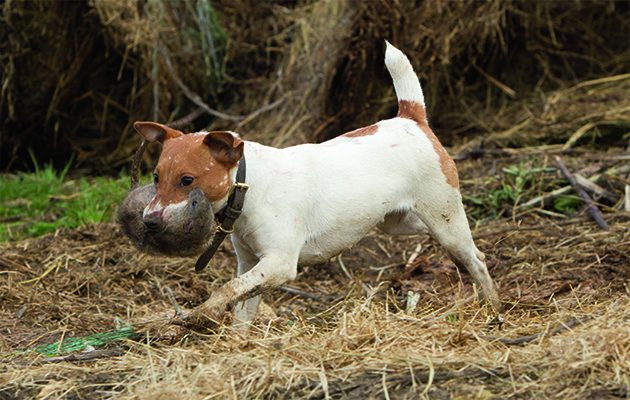 Rat hunting is the main-stay of legal terrier work

There are degrees of terrierness just as there are layers of gundoggery. While any terrier will go ratting, career terriers — those bred specifically as earth dogs — are better to be kept solely for that elite task. In corporate buzzwords heard at a conference totally unrelated to canine matters, these dogs are “pivoted to look at sources of new chaos”. Their whole being centres on going to ground and tackling a variety of quarry.

Certain terrier breeds are more suited to family life, though retaining their terrier spirit and showing more interest in going to ground than is comfortable for the person who simply wanted a roughshooting companion. While most terriers need to be protected from their instincts, this is especially the case with smaller breeds that are still mentally wired for hunting above and below ground but physically no longer equipped with the power or dentition for those disciplines. 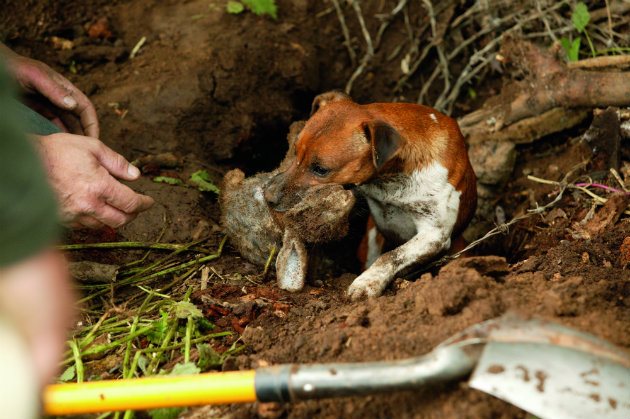 Terriers are hardwired to hunt below ground

At the other end of the spectrum are terriers too big to go to ground, or if they could, you wouldn’t want to deal with whatever lives down a tunnel of that size. As farm vermin controllers they excel, though those breeds that have a fighting ancestry can be touchy with other dogs.

There are also a few breeds that are not terriers at all, such as the Russian Black and the Tibetan, but which had “terrier” tagged on to the breed name for reasons that remain unknown. Then we have the dachshund, which is not a terrier but a hound, but originated as a dog bred for going to ground and doing the same work. By contrast we have the Schnauzer, all three sizes, which is a vermin and guard dog but not intended for earth work. 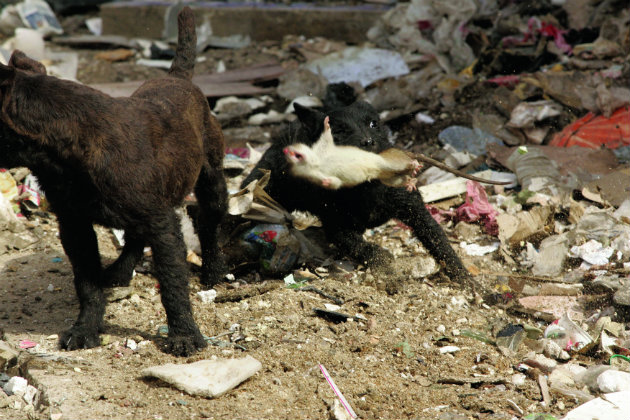 There can’t be many terrier owners who have not at some time seen the little varmint steam past the objective intended by the handler to immerse itself in some kind of trouble that you hadn’t realised was available. There are aspects of terrierness that are hardwired into them and cannot be trained out. Those of us used to more co-operative breeds may go through a period of denial, but we are the ones who have to adapt. Once we have cast aside all the usual expectations, we can — up to a point — train our terriers. Petulant as a Z-list celebrity when thwarted, they sparkle when we cut them some slack. In stopping us from taking ourselves too seriously, the terrier is matchless.

You can find out more about which cookies we are using or switch them off in settings.

This website uses cookies so that we can provide you with the best user experience possible. Cookie information is stored in your browser and performs functions such as recognising you when you return to our website and helping our team to understand which sections of the website you find most interesting and useful.

Strictly Necessary Cookie should be enabled at all times so that we can save your preferences for cookie settings.

If you disable this cookie, we will not be able to save your preferences. This means that every time you visit this website you will need to enable or disable cookies again.